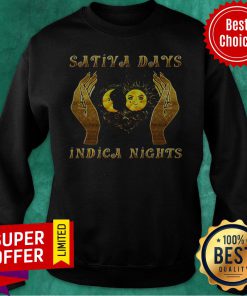 Just a thought – situational synergies. Have a team provide buffs similar to Azaka’s outdoor zone boost, or a specific ‘Favored Enemy’ type. Team A may be good on this Premium Sativa Day Indica Nights Shirt. Crew could have benefits in Barovia given that they’ve been there before (Two times and the Shadowfell a couple of times as well). Force Grey could have benefits in Chult. I’m not sure about other teams, but situational buffs are a pretty good idea. Waffle crew already does kinda have those buffs, look at death’s eyes unclouded. For example and we’ll probably see some more when paulin is added. Also, there’s a champion balance update in the works ™ so we’ll probably see some more of those by then. Buffs doesn’t necessarily actually incentivize the use of all the Companions. So good. So happy. Thank you so much. Then it’s really a nice shirt. So you should buy this shirt.

Champ A buffing only Champ B, who only buffs Champ C, who only buffs Champ D, who only buffs Champ A could lead to far more interesting configurations. Parts of a team could be desirable, Premium Sativa Day Indica Nights Shirt. Less complicated version of this is drizzt/deekin “stronger buff for more qualifying characters,” which could also be used to add buff components as more members are added – needing specific characters by name is stifling for formation setups compared to choosing who and how many you want from a pool, cotli has plenty of examples where x character is hamstrung by needing y. Agreed that Wulfgar’s binary synergy is too much, would be better if there was some benefit to using Regis and Catti alone and so on.